Part X Where Can You Lay That Burden Down? 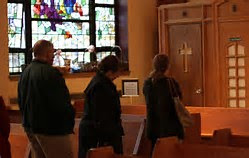 In my trudge through the quicksand of grief following my brother's death, I leaned into the church. I hadn't been to confession in years and I had to gather the courage to go, but I saw it as a safe haven, where I'd be protected by anonymity and confidentiality.  This is a story I wrote about that day:


I sat outside the confessional, wringing my hands.  Tiny beads of sweat collected about my forehead as I glanced nervously around the room.


I had been carrying this sin for years. No matter where I went, what I did, or how much time elapsed, the gnawing guilt persisted.

Finally, unable to bear the weight of the cross alone, I approached the confessional. It was the only safe place to voice my inexpressible shortcomings. I knew, beyond the shadow of a doubt, that I needed the mercy of God.

Had I known my brother Jim was going to die, I would have handled the situation differently. I would have accepted him, atypical as he was, instead of nagging him to meet my standards.  I would have helped him, knowing that he was fulfilling God’s unique purpose in life.  I would have listened, visited, and loved him more.

His death woke me up to the Gospel message.


When it came to loving Jim, I fell short.  Horribly short. The pain was so deep, and the realization so excruciating, that I couldn’t admit it to anyone. At least, not until this hot Saturday afternoon, sitting in the confessional.

I chose the seat behind the veil. The priest welcomed me, and I began, explaining it had been years since my last confession. I stumbled over the initial words but, once I got going, the floodgates opened. Racked with sobs, every fear, every shame, and every sorrow gushed forth. The priest listened quietly.

When I was finally done, I expected the prescribed words of absolution.  Instead, my confessor asked, “Do you think God can forgive you?”

My head snapped to attention. What? I thought. Why was he asking me this? Was he, too, questioning whether I was worthy to receive God’s mercy? Breathless, I wondered why he didn’t just pardon me.

“He does,” the priest assured me, “and I absolve you in the name of the Father, and of the Son, and of the Holy Spirit….”

It was a confession I’ll never forget.

That priest helped me to embrace God’s mercy.  Had he simply absolved me, I might have hung onto the guilt and drowned. But he helped me to personalize the forgiveness of God.

In so doing, he freed me to amend my ways. Now, I strive to choose compassion over criticism, helping others over judging them and giving generously of myself.  I still have a long way to go, but knowing God is working with me empowers me to try again and again.

Come to the source of all mercy. Lay them down at the foot of the cross. Our God is an awesome God. Don’t be afraid to share the unspeakable.  He already knows.

Do you believe He can forgive you?