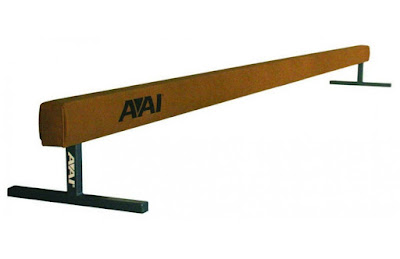 Sara frowned.  It wasn't the first time we'd had this conversation. Before this, she just couldn't part with it. The beam was a present for her during her tenure as a young competitive gymnast, but she quit gymnastics and hadn't used it since she began high school. I felt it needed to go.

"Okay," she said. "I know how you feel. We can give it away, but we need to give it to another gymnast, okay? Let's find a girl who loves gymnastics like I once did."

I ran an ad for the free beam. Immediately, several callers left messages on our answering machine.

I returned the first call, eager to give it away.

They asked a few questions and wondered if it was still available.

But as the conversation continued, I learned it was a business owner who wanted it for their karate school. Not what I expected. My heart sank a little.

When I hung up and told Sara, she frowned and slumped back in her chair.

"I know," I said. "I agree, but I already promised it to the school. We can't change that now.." Oh well, I thought, I really just wanted it out of the house anyway.

The beam sat in our garage for weeks waiting for the karate school owner to arrange to pick it up. Meanwhile, calls kept coming in. Everybody wanted it. One message in particular caught my attention.

“This is Stacy.  My son had a stroke as an infant and now he needs to work on his balance.  Your balance beam could change his life, so if you haven’t given it away yet, we would love to have it.”

Even though the beam was already promised to the karate school, I kept Stacy’s name and number.  I wished I could give the beam to them.

I told Sara. I had her listen to the message.

The next day I ran an errand while Sara stayed home. When I returned, Sara, her eyes sparkling with delight, greeted me at the door.

“Mommy, a girl named Lacy called about the beam," she said. "I spoke with her and she’s eleven years old and loves gymnastics! This is really important to her. Her dad can pick it up and I have their phone number. I want to give it to her!” She tilted her head, looked at me and clasped her hands.

We talked. I called the karate school and found out they decided they didn’t want the beam after all. Then I tried to convince Sara to help the woman with the toddler experiencing balance problems.

Although she felt compassion for him, Sara understood the thrill of back walkovers, handsprings and jumps on the beam.  She recognized those needs in a way I never will.

Tears filled Sara's eyes as I left the final decision to her.

That night, doubts plagued me. Was I being a weak parent? Should I simply override my daughter's wishes? Should I teach her compassion by insisting we give her beam to the little boy? What was with her? Why was she so insistent it go to this girl?

The next day, after much deliberation, Sara announced, “Let’s call the girl’s dad back.”

I did, and the dad and I made arrangements for them to pick up the beam that day.

During our conversation, the dad mentioned that they too had a balance beam. It was too low to the ground and too short to accomplish complex gymnastics moves. They now planned to give it away.

I told them about Stacy, the mom of the boy who had the stroke, and put them in touch with each other.

About an hour later, Stacy called.

“Thank you so much for remembering us,” she said. “You didn’t even know us, and I can’t believe you hung onto our name and number.  This lower beam will be better than yours would have been for my son. It's exactly what we need! Look at how God provides. Thank you!”

Her words humbled me. Indeed! Look at how God provides. I feared I wasn’t teaching my daughter compassion when I allowed her to choose who to give the beam to. Rather, I learned how God could guide her to accomplish his purposes.