Part II -- Who's Ringing the Telephone? 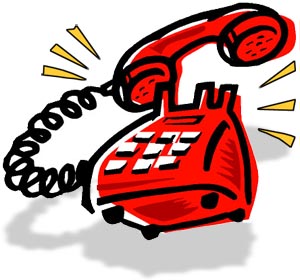 I banged on the door to my brother's apartment, barely waiting for his faint reply.

I fumbled the keys, unlocked the door, and shoved it open.

There, sprawled across the floor, lay Jim.

"What happened?" I screamed.

I dropped the carseat to the floor and raced to Jim's side. My newborn daughter, still strapped in, began to wail.

With a slight motion of the head, Jim turned his eyes toward me. Nothing else budged. His limbs were like bags of concrete.

This was serious. Jim, at age 33, was recently diagnosed with kidney failure. After several dialysis treatments, he decided he couldn't tolerate them and, checking himself out of the hospital against medical advice, calmly and resolutely maintained that he'd rather hope and pray for a miracle than live his life tied to a machine.

I crumbled under the weight of his decision. It clashed with everything in me except for my love for him.

I broke down, sobbing.

He was such a gentle guy...so mild-mannered. Even as a child, I never saw Jim get angry with anybody. There wasn't a mean bone in his body.

How could I defy his simple wish?

And yet, how could I not?

My heart raced. My head was spinning. Sobs racked my body.

Struggling with whether to call 911 or not, I mindlessly reached for the phone handset, scattered across the floor from Jim's fall, and hung it up.

I'll never forget what happened next.

The phone rang. I answered it.

"Hello," the cheery voice at the end of the line said. "This is the visiting  nurse you requested. I'm called to set up an appointment to meet with James..."

Sobbing, I explained that he'd fallen, was immobilized, and didn't want me to call for emergency help. She heard the terror in my voice. She felt the panic. She understood the alarm.


"Yes," I said. I was so distraught, I hadn't noticed my three week-old daughter still wailing in her carseat.


I'd been frozen with fear, but now the voice at the other end of the phone directed my steps.


My actions felt surreal, guided only by the caller's voice. I crossed the room, picked my infant up and consoled her. Then, baby in arms, I returned to the phone.


"Is the baby alright?" the called asked.

Then the caller shifted attention back to my brother. Did he feel pain in his chest?  Was his heart racing? Did he feel clammy?

My panic subsided. Maybe he'd be alright, I thought.

Jim relaxed too. For the moment, the 911 issue lost its focus.

As we ended the conversation, the caller said, "Now, hang up and dial 911."

My hands shook as I began dialing the three numbers.

"What are you doing?" my brother asked. "Don't call. I'm not going to the hospital."

"I have to," I said. I could barely see the numbers on the phone through my tears. "I have to."

Within moments, we heard the approaching sirens. A team of paramedics rushed in. Next thing I knew, Jim agreed to be loaded into the ambulance.

I stood on the sidewalk, cradling my baby, and watched them drive off, siren wailing. My insides were shaking but I felt relieved. Hospitals always fix things, right?

I arrived at the hospital shortly after the ambulance. However, I was banned from visiting Jim in the emergency room because infants weren't allowed back there.

Glancing at my watch, I decided to pickup my oldest from school, gather my preschooler from my neighbor, get a sitter and return with my husband after work, which would have been regular visiting hours.

The day began to feel normal, however, it was anything but.

Neither Jim nor I got exactly what we wanted that day, but we both received precisely what we needed.

Thanks be to that unknown caller.