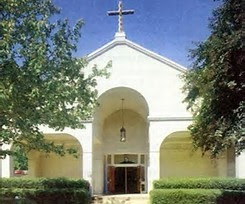 I remember that life felt surreal in the weeks after Jim's death. Then I remember taking nothing for granted, harboring underlying fears that my husband, my daughters, anyone close to me, could suddenly die. It wasn't a good feeling.

And I was sad. Why did  this happen?

I buried the hurt. I didn't know what to do with it. Before Jim died, life seemed effortless. Now...it seemed pointless. I felt so empty. I felt so alone.

Nobody seemed to understand.

I went through the motions of life, covering it with bright red lipstick and stylish clothes, but I was dying inside. Although I put a good face on it, everything I once valued...being a stay-at-home mom, having a loving husband, financial security, a comfortable home....didn't buy happiness.

I was drowning in sorrow.

With time, my friends started slipping away. One told me I needed counseling. (I thought she was crazy!) Another said I seemed depressed. (What did she know?) They just didn't understand. This wasn't like losing a parent. They'd never lost a brother...much less a younger brother...They didn't know what they were talking about.

The misery was deep, continually gnawing at me.

There were other factors. My brother, who only moved to my town a little over a year before his death, had a mental breakdown as a young adult and was never the same after that. He kept to himself, being most comfortable alone or with me. He never married, he had no friends. He lived on a meager disability income, never having worked. He couldn't drive, didn't own a car. He lacked everything most of us thirty-somethings valued so highly.

Although I loved him, I wasn't particularly proud of his lack of accomplishments. So, since he never socialized anyway, many people didn't even realize I had a brother living in town. This added to my isolation after his death. How could I possibly share the trauma of his death with them?  They'd wonder why I never mentioned him before. And, then, as I explained, they'd ask what every thirty-something asks when they first meet: What do/did he do? and I'd be stuck again, having to admit that my beloved brother was a failure.

So, even after his death, I was too proud to talk about all that,

Pride was the sin that isolated me.

Caught in that trap, guilt launched a massive attack on me. If' I'd known my brother was going to die, I would have done more for him...I could have visited him more frequently...I should have made more meals for him....I should have shared my money, my time, my resources...

Whatever I did, I was sure it wasn't enough. It couldn't be enough. If only I had known...

So I slipped further into that black hole.

Finally, it was more than I could bear alone. Joe and I always had Saturday night "date nights" and I remember sitting in posh restaurants, tears streaming down my cheeks, as I confided in him, giving voice to the turmoil raging within.

I remember one particular time when, after listening to me, Joe said, "You did everything you could for your brother. You sound like you think you are responsible for everything that happened." Then he looked me in the eye. "You are not God."

His words shocked me. I was not in control? I didn't think I was God, did I? Was pride getting in my way?

I began to wonder about this God. If I had no control, who did? Who was this God?

A fellow parishioner, stopped by my house unexpectedly one Sunday after Mass. "I noticed you haven't been to Mass in a few weeks," Wendy said. "I thought I'd bring you a bulletin and make sure you are doing alright."

I didn't realize it at the time, but she was the hand of God, extending an invitation.

Then I learned about a nun in our parish who was a grief counselor. Since I could talk to her without obligation, I swallowed my pride, made an appointment and met with her.

I don't recall much about our visit, but I do remember that Sister Carleen was warm, welcoming and understanding. She recommended a book to me, and it helped open doors to understanding my grief. She gave me a glimmer of hope.

She also invited me to the grief support group that met at our church. Months later, after fighting a million excuses why I didn't really belong there, I went. Again, while I remember little of the meeting itself, I do recall feeling relieved to learn others felt like I did. Nobody judged me. Nobody condemned me. I left the church that night feeling hope.

Little did I know, I was taking my first uncertain steps out of a treacherous landscape.

I wasn't aware of it, but God was holding my hand. Leading me. Guiding me.