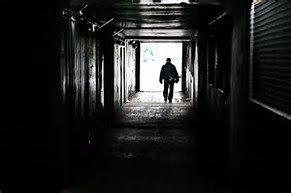 I'm sharing the events of that day because they so clearly illustrate the provision of God. I never want to lose sight of that. And I want you to see it too...not just in these pages but in your own lives as well.

So let's look at the astonishing events that took place that day:
Get the message? We get what we need in the moment we need it, don't we?

In the weeks following Jim's death, I remained amazed by all that. I knew everything was out of my control, and yet, everything was so perfected. I could only attribute it to divine intervention, the presence of God in our lives. I even told my neighbor Debbie that she was like an 'angel' because if she hadn't stopped by my house that day, I would never have been with my brother when he died. I couldn't believe the supernatural peace that covered me in my words, thoughts and actions that day.

The amazement didn't last forever. In fact, before long, I lost focus of the grace that filled me that day.


Instead, the dark shadow of grief soon stole my joy.

I missed my brother. I became angry at his untimely death. I began to think of things I could have done for him...things I should have done.  Deep within, I was conflicted.

I questioned my faith. If God is good, why did He let this happen? Was Jim really in a better place? Did heaven exist? Was Jesus real?

I slipped down a black hole. I was miserable. I was lonely. I was desperate.

That's when I began my search for God.