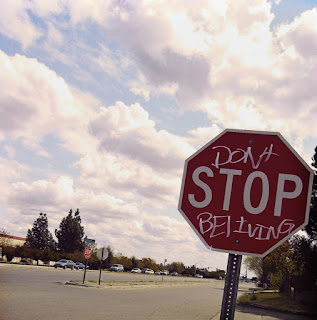 God sometimes leads us outside of our comfort zones, as in this continuing story...Here are the links for Part I, Part II, and Part III  This is Part IV.

After I suggested Peg abandon her agenda and just spend the day with Dad at the hospital, that's just what she did. It was now Monday.

You might recall that when my stepmother, Peg, asked us to come, my husband already had plans to fly out the next morning on a business trip that took him near Dad's destination. Joe planned to come to town Tuesday, when the convention ended.

Near dinnertime Monday, however, Joe phoned me at the hospital. "I'm here," he said.  "I left the convention early. I felt like I needed to come today, not wait for tomorrow."

We were surprised and thrilled! This was before cellphones so there wasn't a lot of communication between us in the chaotic days since I'd arrived at the hospital.

When Joe arrived, Dad rallied. His eyes opened. He looked more alert than he'd been in days. I stepped away to give my husband precious time with Dad. I saw Dad's lips moving, and Joe leaning close to catch what he was trying to say. But all that emerged were faint, unintelligible whispers.

I didn't know what to do. I glanced at Dad, then at my husband.

Finally, one of the nurses offered an opinion.

I still hesitated, but what she said next ended my indecision. "You can come as early as you want in the morning," she said. "Pick your time. 6 am. 7 am. Whenever you want."

That early? Yes, that early. Well, then, I wouldn't really miss anything, would I?

Joe and I, eager to remain in Dad's presence, stayed awhile after Peg headed home for the evening. Finally, tired and emotionally drained, we said our goodbyes. Dad's response, if any, was minimal.

I took one long last look at Dad as we left the room. He was asleep. We would return early the next morning. I wouldn't miss anything. I took Joe's hand and, wordlessly, let him lead me through the shiny hospital hallways, into the elevator, and outside into the crisp night air.


It was late and we hadn't eaten, so Joe and I stopped and ordered a takeout pizza.It was an unusually quiet car ride to Peg's house.

He holds us close to his heart. Every moment. Every heartbeat. Every person.

Back at the house, we broke open the pizza with Peg. We were all together. It was good.

It wouldn't be long before the phone would ring and we'd get the phone call that would change everything.

We were all together. It was good.  .

For I know the plans I have for you, says the Lord. Plans to prosper you and not to harm you. Plans to give you hope and a future.  Jeremiah 29:11