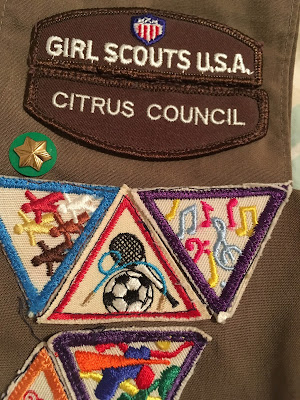 I guess you're wondering how I became a Brownie leader.

After all, I'm not particularly crafty. I can't control a crowd of kids. And, well, it wasn't on my bucket list.

But sometimes, God opens a door before we even know we need it.


It happened years ago, when the leader of our daughter's third grade troop announced she was retiring. I stepped backwards, hoping another mom would volunteer. While Helen and Carol offered assistance, nobody wanted to assume leadership.

I suppressed the nagging inner voice for weeks, but it wouldn't stop. Something just told me I had to volunteer for the position.

Finally, I told Helen and Carol: “I don't really want to do it, so I hope someone else offers," I said. "But if you’re willing to help, maybe I'll be the leader..."  I was swept in and inaugurated faster than I could finish the sentence.


“We’ll work with you,” Helen assured me.  She advised the date of an already-scheduled event that I would have to oversee with them—a camping trip with our Brownie troop and Linda's Girl Scout troop.  The date was set. The older girls would earn a badge by hosting our Brownie campout.


I cringed. What had I done?  With a traveling husband, and two other children at home, this commitment was daunting.  Why was I doing this?  What had gotten into me?

Just weeks before the camping trip, I underwent a routine physical.  I felt annoyed when the lab asked me to repeat the bloodwork, apparently due to technical difficulties.

Days later, Linda, the other troop leader, phoned and invited me to grocery shop for the camping trip, but I declined.  The doctor’s office had scheduled yet a third lab session.

"No," she said. She told me that years ago, she battled lymphoma. I never knew that.

When we hung up, I was thankful that I didn’t have to deal with cancer, just incompetent medical equipment.

The weekend came and during the camping trip Linda and I became fast friends.  She shared stories about her cancer experience, her family life and her faith.


Days after returning home, the physician's assistant phoned again. This time the message left me reeling.

“Due to the abnormalities in your bloodwork, we’ve made an appointment for you with an oncologist," he said. "It appears to be cancer…”

When I arrived at the school, one lone figure appeared in the breezeway: It was Linda.

I jumped out of the car and told her my news. She asked questions. She cried with me. She spoke highly of the oncologist they were sending me to. She helped me regain composure before my kids got out of school.


Over the following weeks, I was diagnosed with cancer...a type of lymphoma.  How could I have known what a comfort Linda would be to me? Had it not been for the camping trip, I would never have known about Linda's experience with cancer or about her deep strong faith.  In the months ahead, she walked beside me, offering inspiration, faith, strength and hope.

I stand in awe of our God. That nagging inner voice insisting I volunteer to be the Brownie leader was his voice.

He called me to lead the troop, not only for the children, but to show me that he’d be there for me every step of the way.

He encourages us to recognize his promptings, trust him, and follow his lead.

We can do this!


During the camping trip, Linda introduced us to this song. It says it all. Click here to listen.