Roll Out Those Lazy Hazy Crazy Days of Summer... 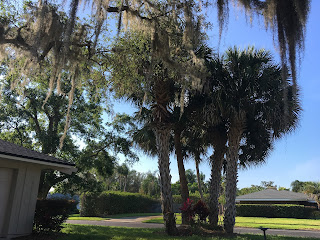 "You've got to come over Wednesday morning," Cathy, my neighbor, said. "I met someone who is a fan of your writing. She can't believe you live across the street from me."

I felt like a kid. Here I was, on a hot summer day, walking to a friend's house to play. I love meeting new people. Especially new people with a common interest in the Lord.
I knew the conversation would be rich.

It was a pleasure to meet Mary, a former resident of Indianapolis, where my Emmaus Walk column runs. She'd been reading it for years. Last year, following what she described as God's calling, she decided to leave everything behind and go on 'pilgrimage'. She ended up settling, at least for now, in Florida. Since then, she's discovered a talent for art and photography that brings the scriptures to life. Where did this come from?

As the conversation continued, we realized that, like Mary, each of us was on the cusp of something new...something different...something exciting and scary all at the same time.

For instance, I've been battling cancer since 2015. Now, as my strength slowly returns, it's obvious to me that life as I once knew it, has changed. It's like I'm emerging from a deep, dark forest and approaching the edge of a clearing. Up ahead, I can only see open ground. There's no track to run on. No worn paths. No familiar routines. Nor do I yet have the ability to create that...at least not yet...and when I do, it probably won't look anything like it did before. What will that look like? What does the future hold?

In Cathy's case, she and her husband also faced uncertainty. In anticipation of fulfilling a longtime dream of taking a yearlong sabbatical to travel, they'd recently bought a Winnebago. As soon as they did, however, doubts arose. Was this the right decision? What if something went wrong? How do you change the tire on a 40' vehicle?

In the end, we all agreed that uncertainty wouldn't stop us. We each felt that God was leading us and calling us to a deeper trust in Him.  We believed that whatever the future holds, we wouldn't be stepping into it alone.

We knew Someone would be with us every step of the way.


You have not handed me over to my enemy, but have given me open ground in which to maneuver.  Psalm 31:8