Does God Speak To Us? 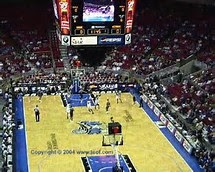 It took me years to wade through the quicksand of grief following my brother's death. These Monday posts are stories of the stepping stones of faith that helped me recover.  Incredibly, my unspoken fears were put to rest in this story, which took place years ago, when I attended my first Orlando Magic basketball game:

Does God speak to us?

At age thirty-three, my younger brother, James Holmes, died in my arms.


I experienced his spirit leaving the body minutes before physical death occurred. While this experience confirmed my belief in separation of body and soul, a resulting doubt and fear about the fate of our souls consumed me.


I was especially concerned for James, because he wasn’t a mainstream person.   He fought mental disabilities, was unemployed, could not drive, and possessed nothing of value.  He was uncomfortable around most people except immediate family.  He did not attend church and spoke very little about God.  In the measures of this world, he was last.


After his death I was in turmoil questioning the existence of God and the condition of my brother’s spirit. Was James “good enough” to get into heaven?  Was I?  Was there even a heaven?


But James was honest.  He was kind.  And grateful for any simple act of kindness we offered.  Beyond words, he was an innocent, kind and gentle soul.  His life was unfairly flawed by his mental disabilities.


At the time I most doubted the providence of God, I attended my first Magic basketball game. My husband and I were chatting during half time when a message blinked on the marquee for only a few seconds but stayed in my heart for a lifetime.  I’ve often mused at the prospect that not only did I happen to look in the direction of the marquee at that precise moment, but also that this message would be displayed at the only game we happened to attend.


“Happy Birthday, James Holmes,” the sign flashed, “from your loving wife.”  The thought of my brother James having a “happy” birthday and the possibility that another could forever love him addressed my deepest concerns.


Does God speak to us?