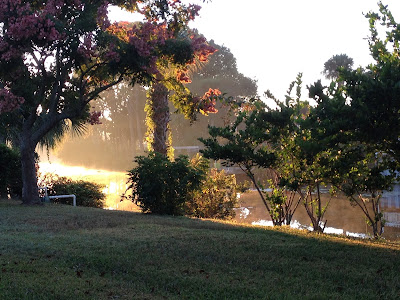 The stories I've told on my Monday posts relate the mighty stepping stones in the direction of healing from the reign of grief.

Although each step was enlightening, change didn't happen overnight. Healing from grief was a marathon, not a sprint. Despite the impact of the wondrous incidents, finding hope, healing and God in the rubble was a process.

Like this: My brother Jim died shortly after my youngest daughter was born, so, almost without even being aware of it, her initial birthdays were overshadowed by dark, smothering clouds of grief.

I baked cakes, invited friends and wrapped birthday presents in happy, sparkly paper, but my joy was dominated by a thick blanket of  sadness quietly hovering over my heart. Every year it would appear. Every year I'd go through the motions.

But that finally changed.

As we planned her fifth birthday party, I looked at my husband and heard myself say something I'll never forget: "This is the first year her birthday is just her birthday."  It was a turning point.

The dark cloud was gone.

I was finally set free.

Not that I ever stopped loving Jim. It just turned into something better.

In a prior post, I talked about a book I read, The Courage to Grieve, which said that you knew you were healing from grief when you could see something good come out of the loss.

At the time, it sounded ridiculous. But the book was right.

So many good things came out of that loss.

First of all, I turned to God. I realized that nothing earthly lasts forever, and no love is greater than the love of God, which is eternal. I learned that my vision is limited, and although I may not understand it, I can trust God. When things are out of my hands, they are in His. He has a bigger, better plan in mind. He is looking at my eternity, not my limited temporal life here.

Accepting that was freeing.

I learned to respect everyone. Before Jim's death, I'd see someone begging at the side of the road and I'd turn my nose up and think, get a job, buddy. But after Jim died, I realized that he could easily have ended up in those shoes. Mental disabilities and his early death stole my dreams for him to achieve what I considered a 'normal' life.

After his death, however, I learned to view his life through the eyes of God, and I learned there was value to Jim's difficult life and early death...perhaps even if it was just to save my prideful, wretched soul.

I learned to be generous. Right in my own home, I tried to be more patient and helpful. I tried to listen more and talk less. I became active at church, giving, donating and volunteering. I joined a bible study and we began making meals for the homeless.

I stopped judging others. I realized it's not my life I'm living, but the life of Christ that is being lived through me (Gal 2:20).  His mission? Love one another.

I learned God is with us in every circumstance, in every breath of our lives. We have nothing to fear. He will guide. He will provide.  We just need to listen.

I learned what we want for ourselves might not always match what He wants for us, but that's okay. I've learned that God's plan is always better.

I learned to be thankful.

I learned to be joyful.

I learned to love.

It was April. Our daughter was turning 5, and it had been 5 years since Jim's death. Those were 5 formative years, in which I established a strong foundation of faith.  Good thing. I needed it for what was to come.