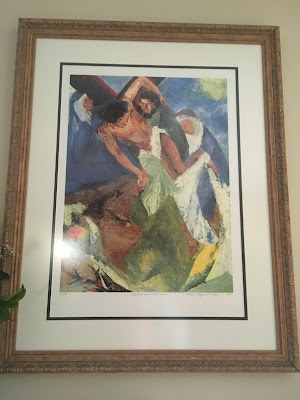 Since cancer treatment resumed, I've been struggling. One day last week, I felt particularly discouraged. After all, I need the ongoing treatments, but the side effects are debilitating me.

One Saturday afternoon, feeling discouraged, I didn't know where to go or what to do. I just needed to get out. So I raced to church where I sat, all alone, in the empty sanctuary, sobbing.

There were no lightning strikes or booming voices from heaven that day, but God did have a message waiting for me.

Days later, I returned for a weekday Mass. My attitude was no better. I was still angry, discouraged and frustrated. I want good health so I can go on and live my life. It's not happening. The thought of returning for additional treatments the next day was daunting.

Additionally, some of the symptoms I'm having caused my medical team to request an MRI of the brain. So, during the Mass, my negativity spiraled downward. What if this didn't go well?  An image of a shaven head popped into mind. No, thanks, I really didn't want that.

At communion, I stood and prepared to take my place in line. That's when I looked up.

Surprisingly, my gaze landed on a piece of modern art in the back of our church. It's been hanging in the church for years, but I never paid attention to it. It had something to do with the crucifixion. But that day, I saw it anew. That day, the image was sharp...definitive....I clearly saw the image of Christ...Christ and his cross.

Quickly the words arose from deep within: I'll bet he didn't want that.

Then, as I stepped into the aisle and claimed my place in the communion line, I noticed the couple in front of me. They were joyful, faith-filled people who, years ago, began a far-reaching prison ministry helping families of those incarcerated. They started it when their son was imprisoned.

Again I heard: I'll bet they didn't want that.

Up ahead I spotted another parishioner who faced serious injuries in an accident.

The same message surfaced: I'll bet he didn't want that, but here he was, helping out during Mass.

I was astounded that, with the help of God, each negative situation had blossomed into something positive.  There's beauty in this place.

As I received communion, I knew I'd come to the right place. I felt at peace.


I am the way, and the truth and the life. No one comes to the Father except through me.
John 14:6